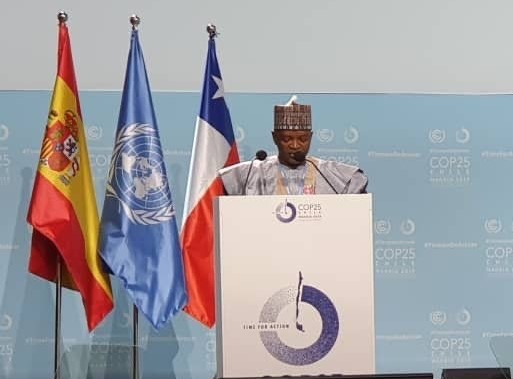 Nigeria appears to have keyed into a mechanism that will enable her to engage in international emissions trading under a climate change mitigation package entrenched in the Paris Agreement.

The International Transferred Mitigation Outcome (ITMO) are the new carbon credits designed under the Paris Agreement to support the estimated $16 trillion in climate finance and investment required to effectively tackle climate change. As the Guidance on Cooperative Approaches referred to in Article 6.2 of the Paris Agreement received its first draft at COP25 in Madrid, Global Environmental Markets (GEM), and Natural Eco Capital on December 11, 2019 signed a memorandum of understanding (MoU) to support the expansion and rapid deployment of GEM’s ITMO Registry technology across Africa.

Sharpe, who said he was delighted to be working with Natural Eco Capital, noted that GEM’s ITMO Registry has the capacity to register projects, originate and house carbon credit projects and carbon credits originated in any country, and as well transfer them electronically to buyers globally who have accounts in the registry or a linked registry, and/or Over The Counter (OTC) or via Carbon Trade eXchange (CTX) globally.

He said: “It was sensational to have the support of Dr. Itua at COP25 and to see the incredible proactive enthusiasm from the Nigerian delegation, especially the Kaduna State team. They made it clear that Kaduna State wishes to be the first state administrators under the national Nigerian registry. They seem to have multiple projects ready to go.”

On his part, Itua who appeared equally delighted pointed out that African countries recognise the need for National Carbon Registry which will be electronically linked to Carbon Trade Exchange (CTX) to help facilitate international sales for each country consistent with their Nationally Determined Contributions (NDCs) and from a cooperative approach.

Through the GEM’s ITMO Registry, Nigeria and other African countries look forward to a “first transfer”, which is the first international transfer of a mitigation outcome to be authorised for use towards meeting her NDC or for use for other international mitigation purposes, he added.

Itua said: “The enthusiasm and interest shown at COP25 by the Nigerian Honorable Minister of Environment, Dr. Mohammad Mahmood Abubakar, and the Director of Climate Change Department, Dr. Peter Tarfa, for a National Registry might see Nigeria launch her own ITMO Registry and become one of the first countries in the world to be ready to sell ITMO’s internationally.”

Itua and Sharpe along with their teams met with several African nations in Madrid, in the hope that Africa will soon become the leader of global ITMO generation and sales, and subsequently lead the reductions in global emissions necessary under the Paris Agreement.

This website uses cookies to improve your experience while you navigate through the website. Out of these, the cookies that are categorized as necessary are stored on your browser as they are essential for the working of basic functionalities of the website. We also use third-party cookies that help us analyze and understand how you use this website. These cookies will be stored in your browser only with your consent. You also have the option to opt-out of these cookies. But opting out of some of these cookies may affect your browsing experience.
Necessary Always Enabled
Necessary cookies are absolutely essential for the website to function properly. These cookies ensure basic functionalities and security features of the website, anonymously.
Functional
Functional cookies help to perform certain functionalities like sharing the content of the website on social media platforms, collect feedbacks, and other third-party features.
Performance
Performance cookies are used to understand and analyze the key performance indexes of the website which helps in delivering a better user experience for the visitors.
Analytics
Analytical cookies are used to understand how visitors interact with the website. These cookies help provide information on metrics the number of visitors, bounce rate, traffic source, etc.
Advertisement
Advertisement cookies are used to provide visitors with relevant ads and marketing campaigns. These cookies track visitors across websites and collect information to provide customized ads.
Others
Other uncategorized cookies are those that are being analyzed and have not been classified into a category as yet.
SAVE & ACCEPT